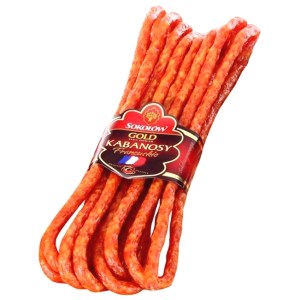 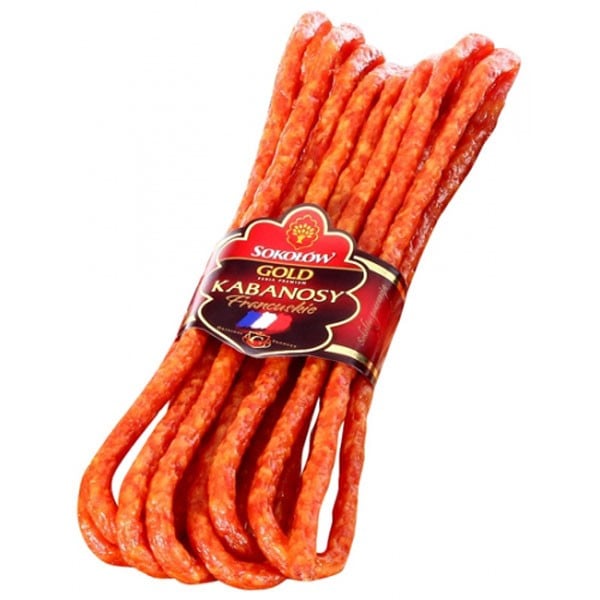 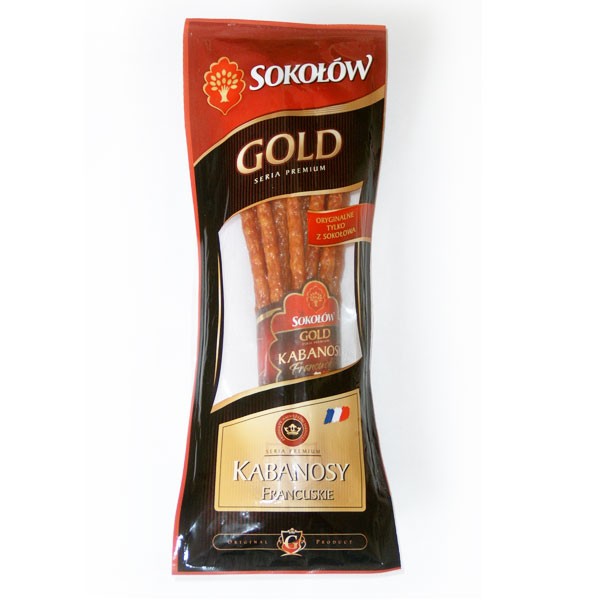 Smoked kabanosi (hunter sausages) French Style are thin and fragrant.
The novelty of the Sokolow company.
A delicious appetizer and a gourmet delicacy.

Traditional recipe!
Vacuum sealed, well secured for transport!
Kabanosy are long thin sticks of Polish dry sausages made of pork.
They are smoky in flavor, and can be soft or very dry in texture depending on freshness.
Typically they are quite long, but very thin, and folded in two, giving them a characteristic appearance.
Their production process, and the resulting exceptional taste and aroma are the features which set kabanosy apart from other sausages. Kabanosy are often seasoned only with pepper.
Unlike other meats, these sausages are typically eaten alone as an appetizer, and often served with cheese.
They are also commonly used as hiking food because they do not spoil as quickly as many other sausages.
Some kabanosy connoisseurs even say that the more dry they are the more tasty they become.
Customer Reviews
Sort by
8 reviews
5 out of 5 Stars
100% of respondents would recommend this to a friend
Ratings Distribution
5 stars 8
4 stars 0
3 stars 0
2 stars 0
1 stars 0
Mark Herr

these sausages are very tasty but they are also very small. I think they could be use as an appetizer rather than a meal.

great choices, great quality, delivery on time - we recommend it to all who like Russian food or interested in trying something new & delicious

Every order I choose something I haven’t tried before. It’s a risky gamble but most often it is worth it. The skinny French style sausage didn’t disappoint . Nothing better with a beer after work.

Delicious will but again

I Liked it very much! The name may confuse but the origin is Poland and it may be even better. Will but again for sure.