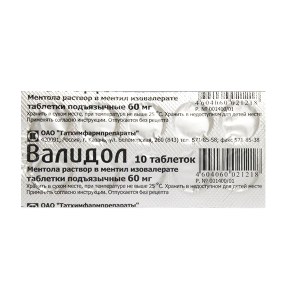 $1.99
Ask a question about this product
Our price
$1.99 USD
Qty
Notify me when this item is nearly out of stock

Validol has a sedative, moderate reflex vasodilating and a calming effect on the nervous system. Resorptive effect of the drug is close to the action of menthol. When used in accordance with the instructions Validol takes effect within five minutes. The mechanism of action of the drug is based on reflex reactions associated with irritation of sensory nerve endings. Remedy has an irritant effect on the receptors of the mucous membranes, resulting in the stimulated formation and release of physiologically active substances (endorphins, peptides, dynorphins, enkephalins) that significantly affect the regulation of pain, vascular permeability and other important processes.

Recommendations:
Validol is indicated for the relief of stenocardia (pain or discomfort behind the breastbone), in functional cardialgia (pain in the heart area), neurosis, hysteria. In addition, it can be used to eliminate the symptoms of sea and air sickness. Also, the drug is very effective for headache caused by taking nitrates. Sometimes the drug is used for external application to relieve itching and discomfort from insect bites. In this case, 5 – 10% alcoholic solution of the drug is applied locally.

Directions:
Validol pills are used sublingually (hold the pill under the tongue until dissolved). Single dose for adults is one or two tablets of Validol. Recommended maximum daily dose is two to four tablets, but if necessary it can be increased. Validol in capsules is used in the same way.
Write a Review