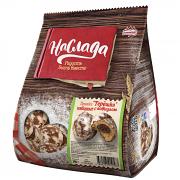 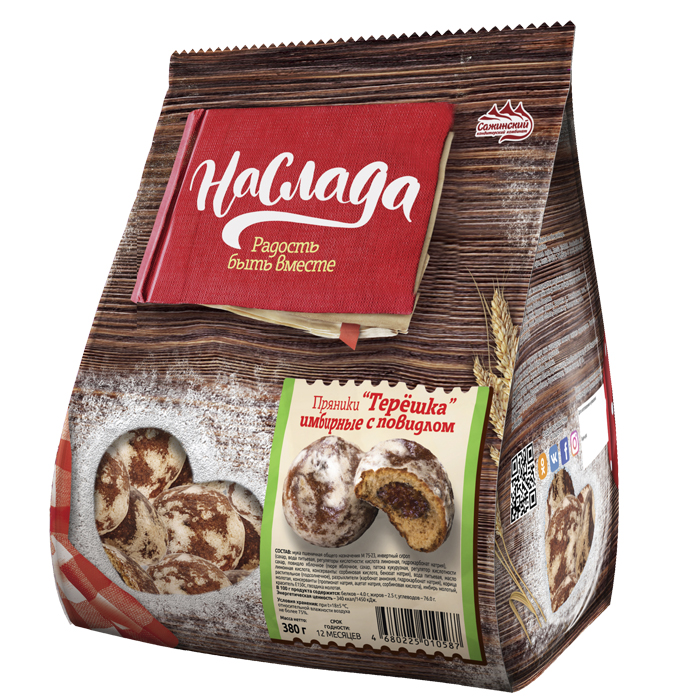 Small curly gingerbread with a filling of jam.

Pryanik (which can be literally translated as “spice-cake” and more often as “gingerbread”, although it rarely includes ginger) is a confectionery baked using a special dough, which is achieved by combining a large amount of sugar, honey and spices.
Pryaniki are usually made in the form of small thick flat cakes coated with pastry glaze. Nuts, candied fruits, raisins, fruit or berry jam can be added to the dough for taste.

The first written references to spiced honey cakes dates back to the 4th century BC. In Russia, pryaniki appeared in the 9th century AD and were called “honey bread”. At that time, they were made from rye flour, berry juice and honey (which amounted up to half of the whole mixture). Later, people started adding various herbs, roots and spices brought by traders from the Middle East and India.

In ancient Russia, pryaniki had always been considered a festive delicacy because of the high price of its ingredients. From the 15th century onwards, pryaniki had become an integral part of Russian national culture and were present in all spheres of life from daily routines to festivals and fairs.

Pryaniki were served both to the royal table and in peasant homes.

Pryaniki given as presents for the rich were baked by special order and weighed up to several poods (1 pood is about 16.3 kg).
From the 17th to the 19th century, pryanik baking became a merchandising activity in Russia. The most popular pryaniki were made in Moscow, Arkhangelsk, Vologda, Vyazmensk, Gorodets, Tula, and Tver.
Customer Reviews
Sort by
1 reviews
5 out of 5 Stars
100% of respondents would recommend this to a friend
Ratings Distribution
5 stars 1
4 stars 0
3 stars 0
2 stars 0
1 stars 0
Katherine

I just sampled a half a dozen kinds of gingerbread from this store - my family enjoyed them all but this brand and flavor was definitely our favorite. The entire package was gone in an instant! I’ll be ordering more and look forward to serving them for the holidays.