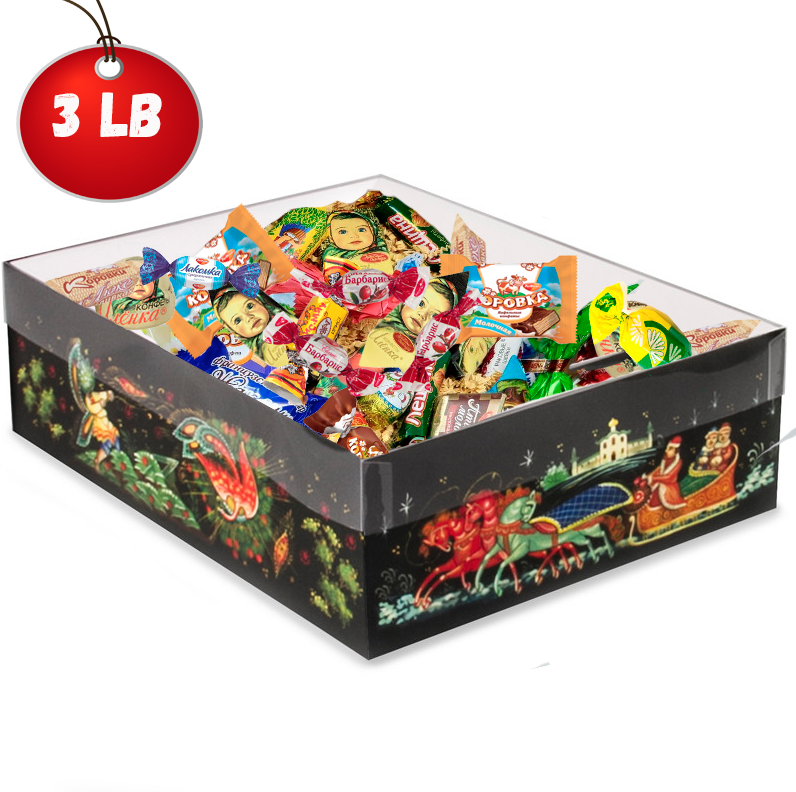 Brand: RussianShoppe
$32.19
Ask a question about this product
Our price
$32.19 USD
Qty
Notify me when this item is nearly out of stock

Close your eyes, open the sweet box: the smell of candy begins a real euphoria.

New Year for most of us is a celebration of childhood.
Tradition is a tradition - and not for us to break it.
This means that in these New Year holidays children and adults as well as decades ago will be happy to rustle with candy.
We offer you a wonderful chocolate-caramel set of candy of famous confectionery factories:
Set of only the most delicious candies: composition may differ from photos.

But where came from the tradition to give chocolates and caramel, packed in different bright boxes, barrels, chests and toys?
The ancient Slavs were pagans, and to appease their many gods they placed sweet products on the table of the church.
Special attention was paid to desserts: on the table fragrant smelled of pies with berry and fruit fillings.
Sweets were considered a delicacy, so treated children, relatives and friends only for the holidays.

The traditions of the Christian era were not much different from pagan celebrations.
Holidays became significantly less, and sweets became more diverse.
But only in rich houses it was possible to try exquisite chocolate, cocoa and the first candies in various forms.
Usually sweets were brought by eastern merchants.
Various goodies parents hid from children to encourage for good behavior, help with au pairs and marks in the educational institution.
Alexey Abrikosov introduced chic "sweet boxes" in production in the 19th century, which only the well-to-do segments of the country's population could afford. Plots of old, good fairy tales were created by hand, these were masterpieces of painting, which now sometimes repeat modern factories of chocolates.
In Soviet times sweets were scarce. Usually on New Year's Day parents bought several types of sweets and put in a transparent package. Later there were beautiful cardboard boxes with images of fairy-tale characters and New Year's heroes. Then the production of chocolates and caramel grew. Manufacturers offered other options of packaging: soft toys, tin cans and chests, boxes in the form of Santa Claus and Snow Maiden. Few people remember, but in Soviet times often gave and adults chocolate hares. Until now, some connoisseurs buy traditional and favorite from childhood delicacies.
Write a Review
SKU: 200036