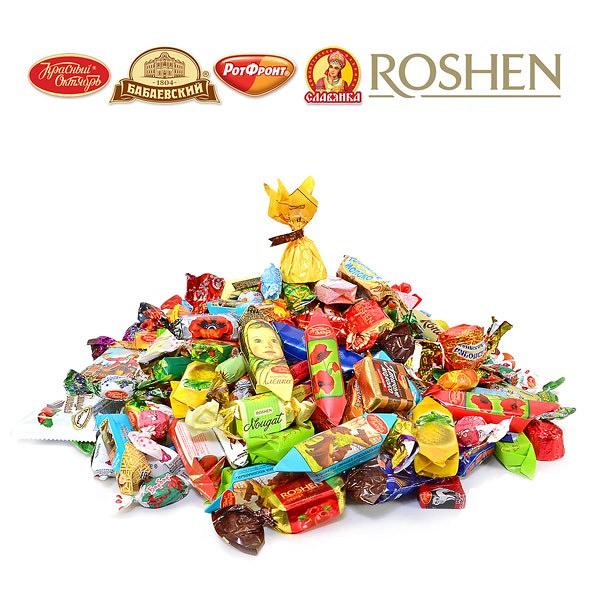 Sweet gift (chocolate and candy in boxes) - universal solution for any occasion!

Not sure which of the sets of chocolates in the boxes to choose?

Find out who's going to give the sweets to.
Perhaps he likes candy with nuts in small boxes to enjoy the treat himself, or prefers a set of candy assorted in a large box to please everyone.

Chocolate sets of chocolates will be a fitting gift for any holiday - March 8 or February 23, New Year's Eve or Christmas, Birthday or Valentine's Day.
The chic packaging and incredibly tasty chocolate inside will certainly please even the most avid lovers of sweets.
Chocolate gourmets will not remain indifferent - on the expanses of our online store you can find sets of elite chocolates.

Babaevsky brand ia a part of the largest confectionery Holding in the Eastern Europe and the leader on the Russian confectionary market. The history of sweets of our enterprise began in the capital of Russia.
UNICONF has gone a huge way from the first Moscow candies to powerful confectionery empire. Thay carefully control all the road of products, from the cultivation of cocoa in Africa (Cote d’Ivoire and Ghana) to consumers satisfaction. UNICONF has its own agricultural sector and two dairy production units.

ROSHEN Confectionery Corporation is one of the world’s largest confectionery manufacturers.We know that in order to keep a leading position, we need to not only move forward, but to set the standards in the industry. That is why the work of ROSHEN is based on two principles: quality and innovations.

History of Slavyanka formation and development is considered as the crowing glory for its staff. In 1571 according to Ivan’s IV Terrible decree the confluence point of the river Ublya into the river Oskol there was founded Ust-Ublinsky burg for Rissian sothern borders warding from the Tatars invasion.

It lingered on for 15 years more and was later abolished.
Still, noblemen were sent to the borders to maintain a patrol up to 1593.
In 1593 town named Oskol was founded as an outpost on the southern borders of the Russian tsardom.
The town was named after the river name on which banks it was situated. General public made military men and farmers. In 1599 Kazatskaya Sloboda was established.

Sweets production in Stary Oskol began from lampad oil manufacturing and, more precisely from the equipment, purchased for its production. Djaykovy installed a steam turbine with 650 horse powers of capacity, which was bought in Belgium.
Steam for the turbine rotation was produced by a huge boiler.

Red October is the oldest confectionery industry in the country and is one of the largest and most famous Moscow confectionery manufacturers in Russia. This year, on December 6, the confectioner "had the good fortune to deliver" the products of his craftsmanship to the table of members of the imperial family.
Those products received the highest approval of the Empress and Grand Duchess.

The Main Benefits For Our Clients Ordering Russian Sweet mixbox at RussianFoodUsa.com