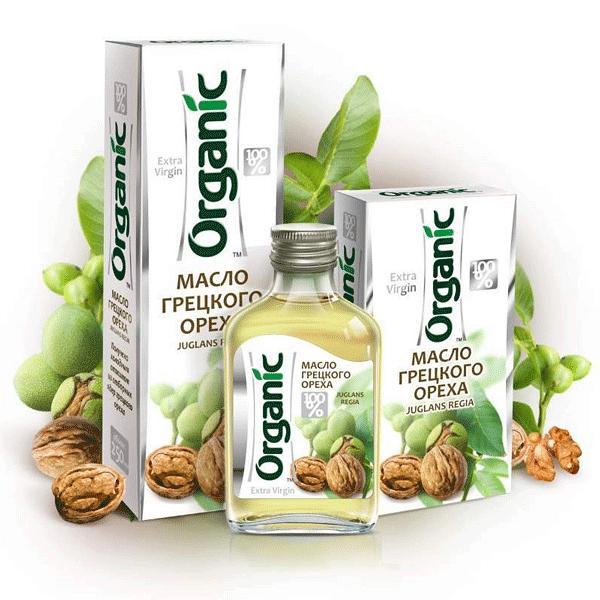 Since the ancient times walnut  was considered a nut, which gave wisdom. Even in ancient Persia scientists believed that walnut made the wit quick and the consciousness clear. In appearance walnut resembles the human brain, as if nature itself shows us the possibility to support the health and longevity. The benefits of walnut oil is confirmed by modern researches.

Walnut oil is manufactured by the method of cold pressing from the selected kernels. This gentle processing saves natural ingredients in the final product .
Walnut oil contains:
- coenzyme Q10 - a substance that has a powerful antioxidant effect, activating the metabolism in cells.
- Vitamin E - a natural antioxidant, has established itself as the vitamin of youth;
- Vitamin B1, corresponding to normal operation of the CNS, actually participating in each process at the cellular level, as is involved in energy production (ATP);
- Vitamin B6, which is involved in almost all metabolic processes in the body. It is one of the most important components of a healthy immune system. It has a positive effect on the skin, hair and nails.
- Biotin, trace elements, fatty acids, phospholipids.
Uses:
- Take 1 teaspoon 2-3 times a day
- Walnut oil can be used in cooking. Walnut oil has a beautiful amber color, original taste and rich nutty flavor. It gives a special flavor to any dish. Oil will be the perfect addition to cereals, salads and snacks, providing the necessary intake of nutrients.
Write a Review