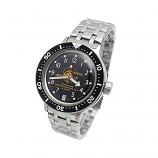 $89.99
only 1 in stock
Ask a question about this product
Our price
$89.99 USD
Qty
Notify me when this item is nearly out of stock

An updated version of the Komandirskie debuted in summer, 2007, and a special anniversary edition of the Amphibia (called the "1967") appeared in early 2008. Both of these models feature high-quality assembly, materials and packaging.